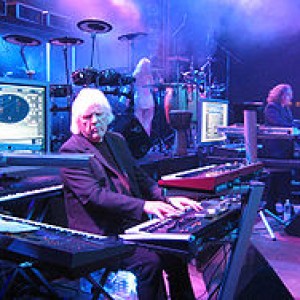 A few days after hearing the sad news of  the passing of personal friend Steve Roberts, who has been an influential writer and contributor to the EM scene in the UK, the global em scene was shocked by the sudden passing of one of its founding fathers, Tangerine Dream’s Edgar Froese.

I can’t believe anyone out there even only remotely interested in em doesn’t know the influence that Edgar and his music has had for almost half a century! He helped define a style that has not only endured, but evolved into so many modern styles that have, arguably, left the original sound and style behind. But that’s another discussion. The simple fact is that most electronic music fans and musicians know who Tangerine Dream and Edgar Froese are, in the same way that rock and pop fans know who Pink Floyd and the Beatles are.

The influence Edgar and his music has had on modern culture and electronic music is immense. Through groundbreaking albums to film music, Tangerine Dream have released a staggering 316 combined albums, soundtracks, singles and samplers. They’ve challenged the em scene and their fans by changing and evolving their sound, style and personal over the years, but have always retained the core essence that is ‘Tangerine Dream’.

Often imitated but never even remotely close to being matched, let alone bettered, Edgar Froese and Tangerine Dream defined electronic music in a way that no-one else has. They were the original pioneers of melodic, experimental sequencer style electronic music with form and structure. It was intelligent, moody, well constructed music that had the ability to transport us to, well, wherever our minds wanted to be transported to!

And when modern composers listen to those early recordings, it’s worth reminding ourselves that Edgar and Co. didn’t have the resources we have today to create the music. What may sound a simple sequence, sound or idea to us now was probably not quite as simple for them to create then. There were no endless tracks to record to, no workstations, no array of soft synths and thousands of presets, sequencer loops or banks of effects, no computers etc etc.  Those guys created it all in a way the many may argue has been lost now to modern musicians – again a discussion for another day.

I saw Tangerine Dream live numerous times in the UK during the 70’s 80′ and 90’s and enjoyed every concert. They have been a part of my life since I bought Phaedra in 1972 and have been a huge influence of my music. Edgar lives on through the huge body of music he helped create and there are some Tangerine Dream albums that really do resonate for me because they remind me of important moments in my own life. And that is what music is, an emotional connection on many levels.

One such memory brings this post back to the beginning. I’m reminded of a great summer evening a few years ago when staying at Steve Robert’s home. We were watching the classic Tangerine Dream ‘Poland’ concert and we’d had a really enjoyable conversation about life, the universe and electronic music. As we sipped our wine we both laughed and agreed that “It doesn’t get any better than this”!

I’m sure that Steve Roberts and Edgar Froese will continue with similar conversations, and more, at that great gig in the sky.

I’ll be saying my own personal farewell to Steve very soon.

So to Edgar, “Thank you. Thank you for all the wonderful music, for the inspiration, and Goodbye”.