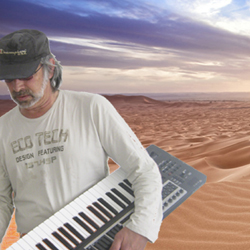 Sylvain Carel began composing music for singers and producers while working in Studios in Paris. He later began writing instrumental music, some of which was used for film and TV. He then began composing melodic instrumental journey style music that crosses the filmic, electronic, new age and space music styles. An avid traveller, Sylvain has been captivated and inspired by the many countries including North Africa, The Middle East, India and Nepal, that he has visited and his music is clearly influenced by his travels. From his first opus ‘Caravansary’, the music is clearly of the ‘Cinematic soundtrack’ variety, wrapped in oriental atmospheres and underlying ethnic flavours. However, while Sylvain’s compositions have strong ethnic influences, they don’t come under the usual ‘World Music’ style. Using synthesisers, electronics tools, ethnic and symphonic instruments, Sylvain Carel explores symphonic, atmospheric and electronic landscapes.

In Sylvain’s words; “The fragrances, sounds, colours, even the wind of these landscapes enchants me. The musics I compose is a reminder to be back there. It may be months, or even years, before I can bring clearly to mind the emotions to compose the memories, to have time to let the ghosts remind me. And the music has to be coherent and exciting”.